Mitochondria have significant impact on the suppleness for cancer cell proliferation and survival in stress environments, for example, nutrient diminution, hypoxia, and during cancer treatments. Mitochondria are the most important supply of reactive oxygen species (ROS), which are taken part in a vital role in mitochondria mediated apoptosis and mitochondrial aerobic respiration [1]. Moreover, in energy stress condition, AMPK activation aggravates cell survival via redox regulation for overcoming the metabolic stress [2]. Thus, the aim of the present study was to investigate the chemopreventive effects of Manuka honey (MH) by targeting mitochondrial dysfunction, while mitochondria play as an important mediator of tumorigenesis.

MH is a good source of natural bioactive compounds and antioxidant capacity [3]. Human colon cancer Lovo cells were cultured in the presence of MH at different concentrations (0 to 50 mg/ mL) for up to 72 h and the cell viability percentage was evaluated by MTT assay. Tali® image based Cytometer was used for evaluating the ROS production and apoptosis rate. Seahorse Bioscience XF24 Extracellular Flux Analyzer was used for detection of oxygen consumption rate (OCR) as an indicator of mitochondrial oxidative phosphorylation by sequential adding of oligomycin, 2,4-DNP and rotenone/ antimycin and extracellular acidification rate (ECAR) as an indicator of glycolysis by adding rotenone, glucose and 2-DG. The sensitive measurement of glycolysis and several parameters of mitochondrial function from adherent intact cultured cells were measured. Western blotting analysis was performed for detection of the protein expression of p53, caspase-3 and AMPK pathway.

MH suppressed the LoVo cells proliferation at dose and time dependent manner. It increased the intracellular ROS production and apoptotic rate of the LoVo cells, while the expression of apoptosis inducer, p53 and caspase-3 also increased after MH treatment. Seahorse analysis showed that MH markedly decreased mitochondrial function by reducing oxidative phosphorylation as an indicator of OCR (Figure 1A). The basal respiration, maximal oxygen consumption, spare respiratory capacity, ATP-linked respiration and proton leak, associated with cell survival, were also decreased after MH treatment compared to control (Figure 1B). In addition, it reduced the glycolysis function and suppressed the AMPK pathway expression as a consequence; it inhibited the production of ATP under metabolic stress.

Our result suggested that mitochondrial dysfunction is one of the prime therapeutic tenures, while MH is a possible elevator of ROS production in order to activated apoptosis and disturbed bioenergetics phenotype of colon cancer cells may contribute to preclinical and clinical appraisal for cancer therapy. 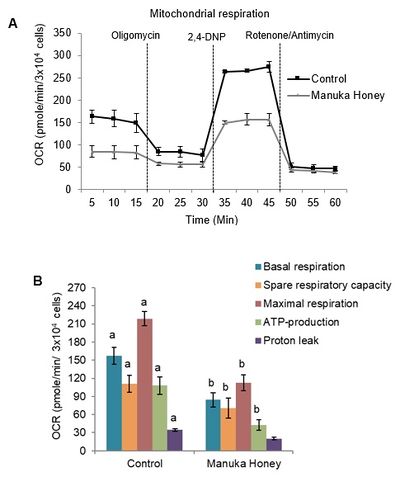 Recepient of a MitoEAGLE scholarship.