Mitochondrial alterations are evident in various neurological diseases; and most notably, in the earliest presymptomatic stages of Alzheimers Disease (AD) pathology[1]. As a result, brain bioenergetics have emerged as an important topic of research. AD is associated with changes in brain pathology that manifest in specific brain regions, such as the frontal cortex and hippocampus. Therefore, our goal was to selectively examine the bioenergetic profiles of brain mitochondria isolated from distinct regions relevant to AD.

Our approach utilized cynomolgus macaques as they have been demostrated to be reliable models for evaluating various age related diseases and conditions[2]. In addition, the use of non-human primates provides sufficient tissue for adequate mitochondrial yield from multiple brain regions as shown in Figure 1. We analyzed isolated mitochondria from prefrontal cortex, entorhinal cortex, and cerebellum from the same animal to determine how bioenergetic profiles may differ between these areas. Prefrontal cortex and entorhinal cortex were selected due to their relevance in AD pathology, while the cerebellar region was selected because it may serve as a useful control region in studies of AD pathology. Mitochondria were isolated from brain tissue using a manual glass-on-glass cell homogenizer and series of centrifugation steps. We utilized two SUIT protocols to examine respiration in high-resolution: RP2 and a previously published protocol by Lanza and Nair[3]. RP2 was selected because it is a standard reference protocol; thus, the methods have been well vetted and the results are easily interpreted. We were also interested in RP2 because it includes titrations to evaluate fatty acid oxidation. The protocol published by Lanza and Nair was applied because it offers an alternative approach that has been adopted by other research groups. By using two protocols we can compare to tease out additional information that one protocol alone may miss. Traces from the two protocols can be observed in Figure 2.

Figure 1. A section of cynomolgus macaque cerebellum. Weight of imaged tissue is 304.22mg, which provided adequate isolated mitochondria for the SUIT protocols. 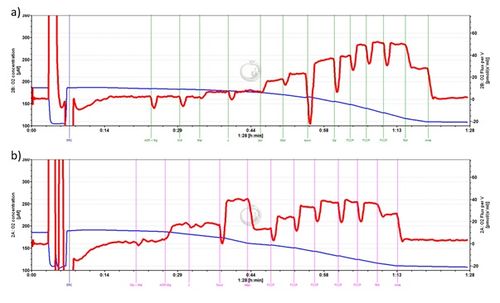