It has been reported that the oxygen (O2) dependence of mitochondrial respiration in permeabilized fibers (Pfi) is ~100-fold higher compared to isolated mitochondria [1]. Pfi are sensitive to low oxygen supply due to diffusion restrictions that limit the supply of oxygen to the core of the fiber bundle. Therefore, hyperoxic conditions (oxygen range 400-250 μM) have been employed to counteract this limitation. Further studies have shown that the addition of a myosin II-specific inhibitor, blebbistatin (BLEB) in the respiration medium reduces this sensitivity and allows the study of ADP kinetics in Pfi at normoxic oxygen levels (250-200 μM). Moreover, it has been described that the use of BLEB prevents fiber contraction and yields high Km values for ADP [2].

In our experiments, we found no differences in O2 flux when comparing rates determined in Buffer ZCtlCr + BLEB and MiR06Cr. However, our results do show that different O2 regimens such as hypoxic and normoxic conditions in the O2k-chamber may lead to a relevant underestimation of OXPHOS capacity due to the oxygen limitation in both media (BufferZCtlCr+BLEB and MiR06Cr). It would therefore appear that, in our hands, the use of BufferZCtlCr with the addition of BLEB does not alleviate O2 dependency in permeabilized skeletal muscle fibers. 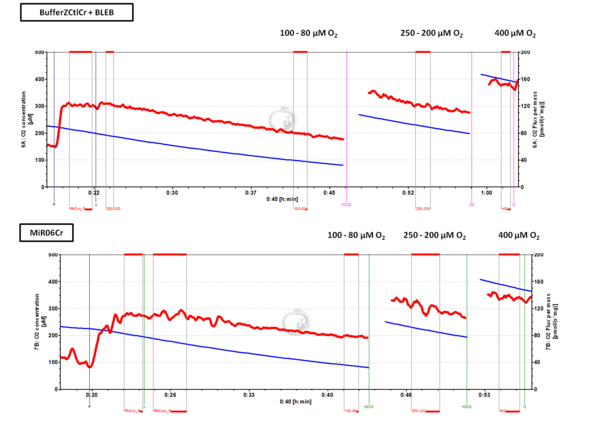 The project was supported by the K-Regio project K-Regio MitoFit, funded in part by the Tyrolian Government and the European Regional Development Fund (ERDF).