In rodents, bilateral ovariectomy (OVX) is a good model for understanding the consequences of female steroid gonadal hormones loss. Many studies have shown that OVX decreases energy expenditure (EE), and this decrease could be the cause of obesity in the model. Forty percent of total body EE is assigned to skeletal muscle (SM), and alterations of SM mitochondrial function are associated with decreased EE, but the effect of OVX on SM mitochondrial function it is still unknown. The aim of this study was to evaluate the effect of OVX and estrogen replacement on SM mitochondrial function in rats. Female Wistar rats (2 - 3 months old) were divided in three groups: sham-operated (SH); ovariectomized (OVX); OVX treated with estradiol (0.7 µg/100 g per day) (E2). The animals were weighed each week until the eighth week. In vivo oxygen consumption was determined during 16 hours (8 h dark/ 8 h light). After the third and eighth weeks (3 W and 8 W respectively), the soleus (SOL) and gastrocnemius muscles (WG) were gently excised, and either frozen in liquid nitrogen or used immediately to test mitochondrial respiration function on high-resolution respirometry (Oroboros Instruments, Oxygraph-2k, Innsbruck, Austria). Muscle tissues were homogenized, and RNA was isolated for analysis of PGC1-alpha gene expression by qRT-PCR. One-way ANOVA with Dunett´s post-test was used to compare the groups. Body mass was already greater in OVX rats after the second week of surgery, as compared to the E2 and SH operated groups. Visceral fat compartment was greater in the OVX than in the SH and E2 groups at 3 W and 8 W. We found no differences in whole body oxygen consumption at any time. Coupled respiration of SOL mitochondria was lower in OVX than in SH or E2 animals at 8 W (P<0.05), but no differences were detected at the 3 W after castration either in SOL or in the WG muscles. Proton leak did not change in any group. Respiration related to ATP synthesis was lower after 8 W of castration in SOL, in relation to SH and E2 (P<0.05) and WG muscles (P<0.05), but no differences were detected at 3 W. However, already at 3 W, there was a decrease of coupled respiration when lipids-derived substrate, palmitoyl-carnitine and glycerol-phosphate, were used in OVX muscles (P<0.05; Figure 1). PGC1-alpha was already 65% lower in OVX than SH and E2 at 3 W after castration. Short-term OVX leads to skeletal muscle mitochondrial dysfunction that is related to lipid substrates utilization. On the other hand, long-term OVX promotes mitochondrial dysfunction on OXPHOS level. The estrogen replacement restores all these disorders. Early mitochondrial events related to estrogen deficiency seem to be responsible for the decrease of later mitochondrial biogenesis. 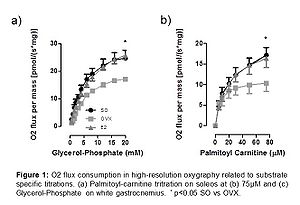