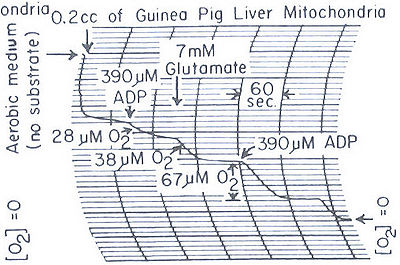 The abrupt initiation and cessation of rapid respiration of “tightly coupled” oxidative phosphorylation systems caused by the addition and the utilization of a known concentration of phosphate acceptor can be satisfactorily measured by a rapidly responding polarographic technique utilizing a vibrating platinum micro electrode. The ratios of added ADP to oxygen utilized (ADP: 0) are 3.1, 2.6, and 1.8 for glutamate, β-hydroxybutyrate, and succinate, respectively. These values are within the range of P:O ratios obtained by Copenhaver and Lardy (21). The errors in the measurement of ADP and oxygen concentrations are about 5 per cent when about 0.1 µmole of ADP is used. Since negligible ADP is found to be utilized in reactions other than oxidative phosphorylation with these preparations, the ADP:0 values correspond to P:0 ratios.

The initiation of increased respiration of mitochondria following ADP addition requires less than 1 second and is rapid enough to explain measured responses of respiration to physiological activity. The abrupt return of respiration to the initial low level as the added ADP is utilized suggests high affinity for ADP. Half maximal respiration requires only 20 to 30 µM ADP under our experimental conditions.