The worldwide increasing trend in the prevalence of type II diabetes mellitus (T2DM), obesity and reproductive dysfunctions have arisen the hypothesis that the increase in metabolic disorders is linked to lower birth rates [1]. However, the biochemical mechanisms underlying this association are far from being fully understood. Herein, we studied the hypothesis that glycerol, a by-product of triacylglycerols (Figure 1), may play a role in this association. When this polyol is present in testicular environment at high concentrations, it leads to an arrestment of spermatogenesis, by disrupting the integrity of the Sertoli cell/blood-testis barrier [2]. The testicular Sertoli cells (SCs) are key somatic cellular components of the testicular environment, providing structural and nutritional support to developing germ cells [3]. In fact, SC metabolism is essential for spermatogenesis and, hence, for male fertility [3] and it is known that these cells express aquaglyceroporins, being capable of importing glycerol [4].

In this work, we proposed to study the potential role of glycerol in Sertoli cell metabolism. We established primary human SC cultures, obtained from 6 biopsies, from men with conserved spermatogenesis subjected to testicular biopsy for spermatozoa retrieval, due to anajeculation or previous vasectomy. hSCs were then grown during 24 hours in control conditions (0 μM glycerol) or exposed to different glycerol concentrations (Infraphysiological - 0.1 μM; physiological – 10 μM; and supraphysiological - 1000 μM). We then evaluated glycerol cytotoxicity (by LDH assay) and how it affected cell viability (by MTT assay). In addition, we studied mitochondrial membrane potential (JC1 assay), and the protein expression levels (by Western Blot) of the electron transfer chain (ETC) complexes on the hSCs of all groups.

In conclusion, a fat-rich diet, associated with increased glycerol availability in the body, may induce significant metabolic changes in mitochondrial physiology and function of SC, which may result in severe alterations in spermatogenesis. 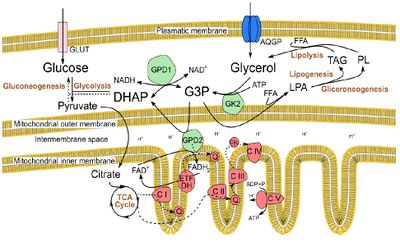 Figure 1. Glycerol metabolism, in Sertoli cells, in the context of intermediary metabolism. Glycerol is imported in Sertoli cells by aquaglyceroporins (AQGPs) or it is obtained as a result from lipolysis. After phosphorylation by glycerol kinase 2 (GK2), glycerol can enter the glycerol-3-P (G3P) shuttle or it can be conjugated with a free fatty acid (FFA) to form lysophosphatidic acid (LPA), entering lipogenesis or gliceroneogenesis. The G3P shuttle also allows glycerol to be directed towards glycolysis or gluconeogenesis, and potentially provides electrons for the electron transfer chain (ETC), via FAD+, in a reaction catalysed by the glycerol phosphate dehydrogenase 2 (GPD2), a mitocondrial enzyme.