In this study we describe the effect of diet reversion in the metabolic and reproductive function of mice. To achieve this, 3 groups of 12 mice were fed with different diets (CTRL – standard mucedola; HFD – high-fat diet and HFDt – high-fat diet for 60 days, then replaced by standard mucedola). Animals were kept in environmental challenging cages for 200 days after weaning, with unrestricted water and food supply. Mice weight, and food and water intake were monitored during the experiment. Metabolic stress tests (IPGTT and IPITT) were performed a week before sacrifice. After sacrifice, several tissues were collected and weighted. Testicular tissue was used for metabolomics analysis by 1H-NMR. Sperm was obtained from epididymis, and mice fertility determined.

Our results show that DR was effective in recovering the body weight and metabolic function in mice: HFDt mice quickly approximate CTRL mice weight after diet replacement, and both groups perform similarly during the metabolic stress tests. However, HFD and HFDt mice had significantly lower sperm viability and motility than CTRL mice, depicting a limited effect of DR in reproductive function. Metabolomics analysis revealed an altered lipid and energy metabolism in HFD mice, coupled to increased oxidative stress (Figure 2). Notably, HFDt mice presented a significant increase in testicular succinate content, compared to other groups. This accumulation may explain the unique characteristics presented by this group, and elicit a mitochondrial involvement in the changes promoted by DR [4].

Overall our data suggest that high-fat diet compromises male fertility and DR has limited impact on the affected parameters. Thus, weight gain may cause permanent damage on male reproductive tract. Testicular metabolic changes promoted by DR prospect the role of mitochondria as the “missing link” between high-fat diet and male reproductive dysfunction. 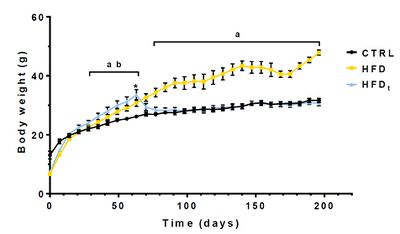 Figure 1: Mice body weight (g) throughout the experiment. Weight of each mice was measured every 7 days. Results are expressed as mean (g) ± SEM (n = 12 for each group). Results were tested by one-way ANOVA with Tukey’s Multicomparison test. Statistical significance was considered when p ≤ 0.05. a) CTRL vs. HFD; b) CTRL vs. HFDt; * Diet Reversion of the HFDt mice. 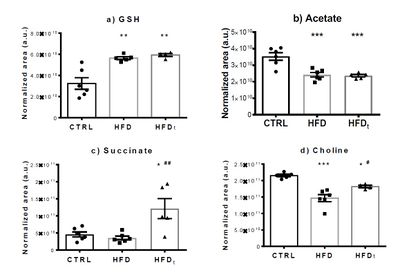