L-lactate (L-LAC) and D-lactate (D-LAC) have been often considered waste products of anaerobic glycolysis and methylglyoxal pathway, respectively. Contrarily, mammalian mitochondria have been shown to metabolize both lactate isomers, due to the existence of isomer specific mitochondrial carriers and enzymes [1,2]. Nothing is known on the possible role of lactate isomers in the overall metabolism of cancer cells, in which both lactate isomers are endogenously formed and considered to be exclusively released to the extracellular phase. Then we examined whether and how the mitochondrial metabolism of L-LAC and D-LAC occurs in human cancer cells, as compared to normal cells.

We found that mitochondria from both prostate cancer and normal cells metabolize both L-LAC and D-LAC [3,4]. Both the isomers can enter mitochondria in a carrier-mediated manner, probably in symport with protons. Moreover, externally added D-LAC causes the efflux of malate from prostate mitochondria, at a higher rate in PC-3 than in PNT1A cells, probably due to the existence of the D-LAC/malate antiporter, already shown in rat liver mitochondria [2,4]. L-LAC and D-LAC are oxidized inside mitochondria by the mitochondrial L-lactate dehydrogenase (mL-LDH) located in the matrix [1,3] and the flavoprotein D-lactate dehydrogenase (D-LDH), associated to the inner face of the inner mitochondrial membrane [2,4], respectively. The mitochondrial metabolism of both lactate isomers was found to be more active in cancer than in normal cells, likely due to the higher mL-LDH and D-LDH expression and activity found in the former.

We propose that the mitochondrial metabolism of lactate isomers in prostate cancer cells could account for anaplerosis of Krebs cycle intermediates in the case of L-LAC, and for energy production and export of malate, this ultimately supporting cytosolic NADPH-dependent processes crucial for cell viability and proliferation, in the case of D-LAC. 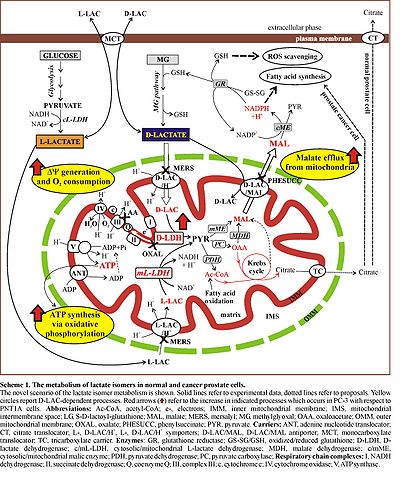