Marfan syndrome is a connective tissue disorder caused by mutations in FBN1 encoding fibrillin-1 and characterized by cardiovascular alterations, predominantly involving thoracic aorta aneurysms. Although with a lower prevalence, an association of Marfan syndrome with neurovascular complications has been reported[1-6]. However, cerebral artery properties in Marfan syndrome have never been explored. Marfan syndrome is linked to enhanced TGFβ signaling which is known to induce Nox4 isoform of NADPH oxidase expression, a major reactive oxygen species-producing enzyme in the brain[7-10].

Previous studies of our laboratory show that the Middle Cerebral Arteries from Marfan mice develop modest structural changes along the progression of disease.

Characterize for the first time properties of the middle cerebral arteries composition from a mouse displaying the most common class of mutation observed in 6-month-old Marfan syndrome Fbn1 (C1039G/+). The work also aims to evaluate the protective effects of the TGFβ-NOX4 pathway in the same four conditions. For these two aims we worked with mice from four conditions: mice control NOX4 (+/+), MARFAN Fbn1 (C1039G/+) NOX4 (+/+), CONTROL NOX4 (-/-) , MARFAN mice Fbn1(C1039G/+) NOX4 (-/-).

Analysis with MetaMorph Image Analysis software of two stacks of confocal images of several regions from each arterial segment demonstrated that the only variation of nuclei number is detectable in MARFAN mice Fbn1 (C1039G/+) NOX4 (-/-) with respect to MARFAN mice Fbn1(C1039G/+), in particular the significant difference is present only in the number of adventitia cells.

ROS levels were evaluated by DHE-derived fluorescence, and they were higher along the MCA wall of Marfan mice than in wild-type mice. The only variation was observed between MARFAN NOX4(+/+) and control. This suggests that the superoxide anion is not increased via Nox4, but probably through other Nox such as Nox1.

Our study contributes to understanding of the role of the TGF-β/Nox4 signaling pathway in cerebral vasculature in healthy, and particularly in Marfan patients, since we show that genetic depletion of Nox4 in Marfan mice induces collagen deposition which contributes to arterial wall hypertrophy, thereby causing overt MCA structural alterations. Overall, the results of the present study suggest that Nox4 has a role in regulating cerebrovascular resistance in Marfan animals. Thus, our findings lead to the hypothesis that an overall reduction in TGF-β signaling, an ongoing therapeutic approach against aortic aneurysm formation in MFS, might have a negative impact on brain circulation. 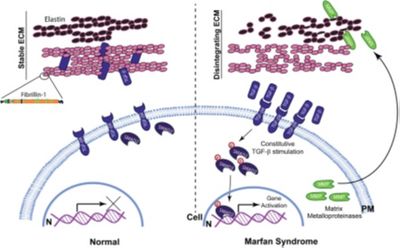