Triclosan (5-chloro-2-(2,4-dichlorophenoxy)phenol) (TCS) is a synthetic drug with a broad spectrum of antimicrobial activity [1]. The antibacterial effect of TCS has been well studied and is generally considered to be associated with the inhibition of the enoyl-acyl carrier protein reductase (ENR), a key enzyme in the biosynthesis of fatty acids. As a result of ENR suppression, the synthesis of membrane phospholipids and proliferation of microbial cells are inhibited.

It has long been believed that TCS is harmless to mammals, since they do not have the ENR enzyme. However, evidence has been recently accumulated that toxic effects of TCS are also manifested in eukaryotes [1]. It is generally accepted that mitochondria are one of the most important targets of TCS. The development of a variety of pathologies due to the effects of TCS is associated with mitochondrial dysfunction [2]. Previously, it was shown that TCS induces uncoupling of respiration and oxidative phosphorylation, inhibits the activity of the II complex of the mitochondrial respiratory chain and enhances the formation of reactive oxygen species [3]. In addition, we have recently shown that TCS is able to permeabilize both artificial membranes (liposomes) and natural membranes of mitochondria [4]. However, the exact mechanism of action of TCS is still unknown. Therefore, in the present work we have studied the mechanism of TCS-induced permeabilization of rat liver mitochondria, and also the possible physiological significance of such permeabilization.

Mitochondria were isolated from the liver of Wistar rats by differential centrifugation. The swelling of mitochondria (0.4 mg/mL) was measured as a decrease in A540 in a stirred cuvette at room temperature (~22°C) using a USB-2000 spectroscopy fiber-optic system (Ocean Optics, USA). The amount of cytochrome c released from mitochondria was determined spectrophotometrically at 414 nm. Liposomes (large unilamellar vesicles, LUV) were obtained by a conventional extrusion technique.

As shown in Fig 1, TCS induced a high-amplitude swelling of rat liver mitochondria. The mitochondrial swelling occurred immediately after the addition of TCS, without a lag-period. The maximal swelling rate was observed at TCS concentrations above 50 μM. The assessment of average hydrodynamic diameter of mitochondria in the absence and presence of 51 μM TCS gave values of 0.54±0.09 and 0.94±0.09 μm respectively. The TCS-induced swelling of mitochondria was insensitive to the specific inhibitor of mitochondrial permeability transition (MPT) pore cyclosporin A (CsA) (Fig 1). This suggests that the TCS-induced mitochondrial permeabilization is not due to the opening of an MPT pore and occurs by another mechanism. Mitochondrial swelling induced by TCS occurred both in the absence and presence of respiratory substrates. However, it should be noted that in the presence of succinate as a respiration substrate, the rate of swelling was significantly higher (not shown). It should be noted that the addition of TCS to the suspension of mitochondria resulted in the release of cytochrome c, a proapoptotic protein. It can, therefore, be assumed that the release of this proapoptotic protein and the subsequent initiation of programmed cell death is one of the key mechanisms of the toxic effect of TCS on eukaryotic cells.

Earlier, we assumed that TCS is capable of inducing lipid pore formation [4]. However, the pore induction mechanism was not established. Therefore, in the next part of the work, we investigated the mechanism that underlies the permeabilization of the liposome membrane by this agent. As shown previously, TCS is capable of inducing the release of a fluorescent dye sulforodamine B from liposomes [4]. Our results suggest that structural rearrangements take place in the suspension of liposomes, which can be accompanied not only by loss of membrane integrity, but also by membrane rearrangements. We have assumed that these processes are based on a change in the phase state of the liposome membrane. To test this assumption, experiments were conducted to study the effect of TCS on the phase state of a liposome membrane using a fluorescent probe laurdan. Laurdan is an environment-sensitive fluorescent probe, which is conventionally used for monitoring phase state of lipid membranes. Generalized polarization (GP) of laurdan, an indicator defined as the relative difference between fluorescence intensities at two wavelengths (red and blue peaks), reflects hydration of membranes and mobility of water molecules in the region of lipid heads – parameters closely related to the phase state of lipid bilayer.

It was established that the GP parameter increases with increasing concentration of TCS. It is concluded that TCS changes the structure of the membrane, reducing its fluidity, but without leading to the formation of a solid phase. In addition, we found that in the presence of TCS, the heterogeneity of the membrane of liposomes increases and this leads to the simultaneous presence in the membrane of domains with ordered and disordered phases.

The results obtained suggest that TCS is a potent permeabilizing agent for both artificial and biological membranes. The mechanism of action of TCS may be due to its ability to cause structural changes in the bilayer and in particular the phase separation of the membrane. According to the data obtained, this permeabilization can underlie the processes of cell death, which may be one of the most important factors responsible for the toxic effect of TCS on eukaryotic cells. 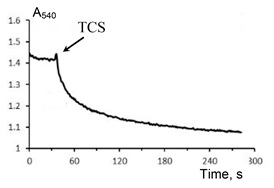 Figure 1. TCS-induced swelling of rat liver mitochondria in the presence of CsA. 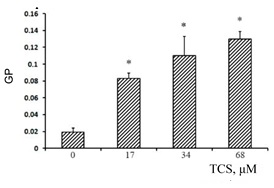 Figure 2. Dependence of the GPlaurdan in the membrane of rat liver mitochondria on the concentration of TCS.