Encysted embryos of Artemia franciscana undergo a dramatic respiratory depression upon release from the adult female as they enter a state of hypometabolism termed diapause [1]. Strategic enzymes involved in trehalose catabolism are inhibited during diapause, namely trehalase, hexokinase, pyruvate kinase and pyruvate dehydrogenase [2]. Trehalose is the sole source of fuel in the embryos, and hence downregulation of trehalose catabolism results in severe limitation of metabolic fuel available to the mitochondrion. We now report that such metabolic depression is heightened by inhibitions within the mitochondrion. Respiration studies of embryo lysates document a depression of oxidative phosphorylation during diapause (compared to post-diapause) in the case where substrates for respiratory Complex I (pyruvate&malate) are used as the fuel source in the OXPHOS state (Fig. 1). Reduced respiration through Complex I is supported by Western blot analysis that demonstrates pyruvate dehydrogenase becomes phosphorylated during entrance into diapause [2]. When substrates for Complexes I&II (pyruvate&malate&succinate) are added simultaneously, the increased electron flow through the Electron transfer-pathway (E, non-coupled) allows the detection of respiratory inhibition by the phosphorylation system during diapause, as judged by the lower OXPHOS capacity (P, coupled) and correspondingly lower P/E coupling control ratios. The inhibition is eliminated as the diapause extract is diluted, a result consistent with the presence of a diffusible inhibitor. Similar patterns are seen with Complex II substrate alone (succinate), which supports a much higher OXPHOS capacity than that observed through Complex I alone. The nature of the potential inhibitor is unknown at present, but one candidate could be long-chain acyl CoA esters that are known to inhibit the ANT [3] from either side of the inner mitochondrial membrane. Taken together, restriction of glycolytic carbon to the mitochondrion appears to be the primary mechanism for metabolic arrest in A. franciscana embryos during diapause, which is accentuated by inhibition of Complex I and the phosphorylation system. 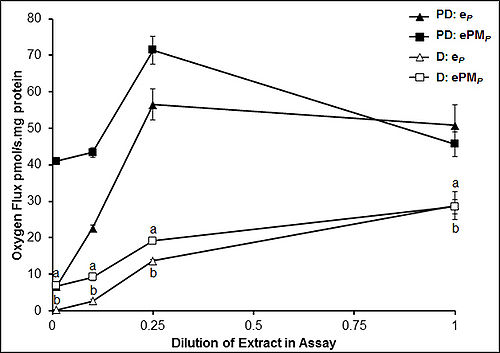 Oxygen flux stimulated by saturating ADP with endogenous substrates alone (eP) and by ADP with exogenous pyruvate+malate (ePMP) as a function of dilution of lysates prepared from diapause (D) and post-diapause (PD) embryos. Values are expressed as means ± standard deviation, N=4 (post-diapause), N=5 (diapause). Values for ePMP and eP measured in diapause lysates were significantly lower (as indicated by ‘a’ and ‘b’ respectively) at all dilutions when compared to corresponding oxygen fluxes in post-diapause lysates (P ≤ 0.0001).

Retrieved from "https://wiki.oroboros.at/index.php?title=Hand_2012_Abstract_Bioblast&oldid=203286"
Category:
This page was last edited on 8 June 2020, at 10:16.
This page has been accessed 13,790 times.
Privacy policy
About Bioblast
Disclaimers