Mitochondrial dysfunction is associated with a variety of both congenital and acquired heart diseases. Recently, there has been growing interest in the research of cardio-toxic adverse effects of commonly used drugs which may cause severe damage of cardiac mitochondria leading to its serious clinical manifestation (arrhythmias or heart failure). Several methods are currently used for investigation of mitochondrial metabolism of human cardiac muscle on high-resolution respirometry, but these are limited either by need of a large amount of tissue biopsy (isolated mitochondria) or lengthy, time-consuming process of sample preparation (permeabilized muscle fibers). Moreover, permeabilization of cardiac muscle fibers allows still complicated and inaccurate determination of citrate synthase activity as marker of mitochondrial content in the measured sample.

Our study aims to develop the protocol of human cardiac tissue preparation, which could be performed from minimal amount of biopsy and would be fast and reproducible. We adopted method of tissue homogenates previously described by Pecinova et al. [1] on animal models. After preparation of tissue homogenates, we aimed to develop a protocol for measurement of basic mitochondrial functions by high-resolution respirometry (HRR; O2k-Oxygraph). The heart muscle samples were obtained from right atrial appendages in patients undergoing cardiac surgery (n=28). Firstly, we performed a series of experiments to obtain an optimal concentration of tissue homogenate without damage of outer mitochondrial membrane during homogenization process. After that, we developed substrate-uncoupler-inhibitor-titrations protocol to study basic mitochondrial parameters. Mitochondrial functions were assessed immediately and in different time intervals after muscle biopsy to test durability of samples. Lastly, we focused on a range of variability between prepared tissue homogenates and its normalization on citrate synthase activity.

Muscle tissue was cut into small pieces on ice and disrupted by 8-10 strokes in a Potter-Elvehjam Teflon-Glass homogenizer (750 rpmi, clearance 750 nm). We confirmed the integrity of outer mitochondrial membrane as the rate of oxygen consumption (OCR) increased up to 16±6% after addition of cytochrome c. Optimal concentration of homogenate was determined as 2.5% (=2.5mg of tissue/per 100 ml of isolation buffer). The oxygen consumption rate dropped by 2% with every 10% of decreasing oxygen concentration in the chamber until a steep part of the curve was achieved. Accordingly, we developed a mathematical adjustment of OCR to oxygen limitation. Final concentrations for substrates were established for glutamate (15 mM), malate (2.5 mM), succinate (10 mM), cytochrome (10 µM) and ADP (1.5 mM). Optimal concentration for ATPase inhibitor oligomycin was 1 µM and for uncoupler FCCP 2.75 µM without inhibitory effect. Durability tests demonstrated that heart biopsy sample was stable on ice for up to 48 hours (with huge inter-individual variability). Coefficient of variation was 33.2±16.8 % for maximum respiratory capacity, 10.2±5.3% for coupling ratio and 18±10% for coefficient of variation in citrate synthase measurement.

We developed fast and simple method for assessment of mitochondrial functions in cytosolic context of human heart muscle, which is possible to perform from the minimal amount of tissue (about 10 mg) during e.g. endomyocardial biopsies. In order to reduce our variability, we plan to filtrate the crude homogenate through nylon mesh before its insertion to the chamber of HRR or before spectrophotometric assay of citrate synthase activity. Obtained data from high-resolution respirometry could be then normalized to the amount of mitochondrial content. This can be of particular interest in diseases, where the activities of mitochondrial enzymes are decreased, but mitochondrial proliferation can compensate for this defect, so the resulting oxygen consumption rate can be almost unchanged. 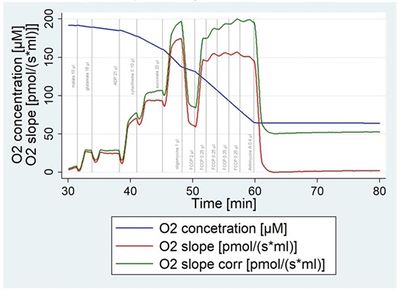