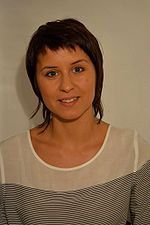 Amyloid β oligomers (AβOs) are crucially involved in Alzheimer’s disease (AD). They are still ˝mysterious entities˝ in terms of their precise molecular composition, their in-cell formation, traffic and actions. We have recently established a subcellularly localized conformational-selective interference approach, based on the expression of an intrabody against AβOs in the endoplasmic reticulum (ER) [1]. This intrabody is a recombinant antibody domain (scFvA13), previously isolated in our laboratory, that selectively binds to AβOs, with high selectivity and specificity with respect to Aβ monomeric species or fibrils [2].

For these studies, we exploited the 7PA2 cells (familial AD CHO cell model), the gold standard for natural AβOs production. Mitochondrial membrane potential was evaluated following the mitochondrial electrophoretic accumulation of the membrane permeable fluorescent cationic probe JC-1. Mitochondrial respiration was measured by high-resolution respirometry in intact and permeabilized cells. The concentration of ATP was quantified by chemiluminometry under basal cell metabolic conditions.

Recently, we described that 7PA2 cells have another characteristic relevant to Alzheimer’s disease – a severe mitochondrial dysfunction, due to a chronic AβOs exposure and production [3]. We have newly established cell line, the 7PA2-A13K, as the model for conformational-selective interference with AβOs inside the endoplasmic reticulum (ER). These cells show a significantly lower level of secreted AβOs, without their intracellular accumulation and most importantly, through this modulatory effects on the levels and assembly of AβOs, a strong rescue of mitochondrial dysfunctions and bioenergetic deficit occurs (Figure 1).

These data provide an important evidence for the fact that the AβOs are formed inside a cell, precisely in the ER, from where they exert their toxic action on mitochondrial physiology. These data contribute to the recent findings about the importance of the ER – mitochondria interplay in the pathogenesis of Alzheimer’s disease and highlight the subcellular compartment, called MAM – mitochondria associated ER membranes - as an important cellular target for the intracellular actions of AβOs. Future studies, that will extend these findings from a well defined cell model to neurons and, possibly to human neurons, will have to take into account the importance of organelle continuity and cross-talk for the cell homeostasis and AD pathology. From a methodological point of view, these results provide the first example of a functional experimental approach, conformational selective interference (CSI), that could find many applications for the studies of protein modifications in vivo. 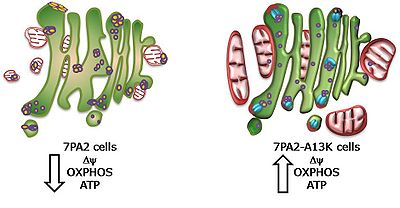