Recent studies have shown the increased risk of the development of type 2 diabetes in the breast cancer patients, and vice versa, the higher incidence of breast cancer in type 2 is reported in diabetic patients. Therefore, scientists are facing the challenge to find agents that could hamper the development and progression of these two pathologies. When searching for the compound candidates that might be useful as anti-cancer therapeutics, it may be tempting to consider a cancer state as a metabolic disease, in which cell metabolism - with the focus on cell mitochondria, could be regarded as the target of a drug action. Taking the above into consideration, the aim of our project was to verify whether the mitochondria of breast cancer cells (4T1 cell line) could be an important target for agents such as metformin (MET, the most widely used medicine in type 2 diabetes), methylglyoxal (MG, a product of carbonyl stress in patients with diabetes) and X radiation. Metformin is now being proposed as an anti-cancer drug for the treatment of a variety of different types of tumors [1]. Metformin was also found to improve the response to radiotherapy in several malignancies [2]. Therefore, in this study, we investigated whether metformin enhances the vulnerability of cancer cells to radiotherapy in the conditions of experimental carbonyl stress induced by MG. We were also interested whether the targeting of cancer cell 4T1 mitochondria in the course of the treatment of both coexisting metabolic impairments (cancer and diabetes) would be justified, and more even so, considering the fact that numerous studies have pointed at mitochondria complex I as a target in the metformin-induced inhibitory effects on cancer progression [3]. In this scientific report the hypothesis assuming that „carbonyl stress combined with X rays increases anti-cancer properties of metformin via mitochondrial pathway" has been tested.

According to clinical pharmacokinetic studies, the recommended therapeutic dose of metformin is within the range of 5-20 µM [4]. However, the concentrations of metformin used under in vitro conditions are much higher and show a considerable differentiation from one study to another. Hence, in the present study we decided to test the effects of both MET and MG at their estimated by ourselves IC25 concentrations, which were several times lower concentrations than those commonly used in the in vitro studies by other investigators. Overall, our estimates have suggested to treat the breast cancer cells (4T1) with either metformin (1.5 mM) or methylglyoxal (50 µM) or both at 24 hours prior to the irradiation (2 Gy/min, 1 min) with an X-ray generator. After irradiation the cells were incubated for further 24 hours. Cell viability was estimated with the use of MTT assay. The polarographic method (O2k high-resolution respirometry; Oroboros Instruments, Innsbruck, Austria), as well as flow cytometry (BD FACS Canto II, BD Bioscience, San Jose, CA, USA) with the JC-1 staining were used to test – respectively, the bioenergetics activity of mitochondria and to assess the mitochondrial membrane potential of 4T1 cells subjected to the action of the above mentioned factors. Bioenergetics experiments were carried out on the digitonin-permeabilized cells and the following protocol [5] was applied to the experiments: 1GM (2 mM; 0.8 mM), 2ADP (1 mM), 3P (2 mM), 4S (1 M), 5U (titration with FCCP), 6ROT (1 mM) and 7Ama (5 mM).

Our findings revealed the relatively high cytotoxic activity (reflected by significantly reduced cell viability), when 4T1 cells were treated with a combination of the agents ‘MET+MG’, compared to the effects exerted by MET or MG acting alone. Hence, based on these preliminary outcomes we suggest that carbonyl stress most likely increases the mito-toxic activity of metformin and/or vice versa. Nevertheless, our results have unambiguously revealed that the mitochondria of 4T1 cancer cells are not sensitive to the action of the tested compounds (Table 1). Also, the recorded changes in the mt-membrane potential were not statistically significant. Otherwise, the X radiation effectively inhibited the mitochondrial activity of 4T1 cells, although we did not prove that metformin could increase the vulnerability of breast cancer cells to radiotherapy, as we had suggested in our scientific hypothesis (Fig. 1).

In summary, it seems that both metformin and methylglyoxal, when used under in vitro conditions at relatively low concentrations (IC25), may not reveal the properties, which could be taken into account when planning anti-cancer therapies aimed at mitochondria as the therapeutic targets for these compounds.

Data are shown as medians and interquartile ranges, n=6. All values of the oxygen consumption by mitochondria of 4T1 cells, untreated or treated with 1.5 mM metformin (MET), 0.05 mM methylglyoxal (MG) or both (MET+MG), were corrected by ROX (Residual Oxygen). Oxygen consumption was expressed as pmol O2 per second per 106 cells. There were no statistically significant differences between the tested samples (Friedmann’s test). 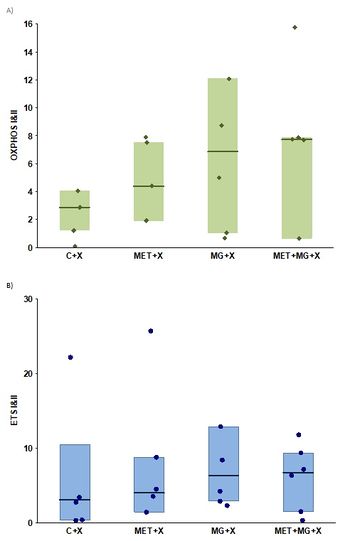 Figure 1: Selected respiratory states: (A) OXPHOS and (B) ETS of mitochondrial respiration in the digitonin-permeabilized breast cancer cells (4T1 cell line) treated with 1.5 mM metformin (MET), 0.05 mM methylglyoxal (MG) and radiation X (2 Gy/min; 1 min). Data are shown as medians, interquartile ranges and raw data, n=6. Oxygen consumption was expressed as pmol O2 per second per 106 cells. All values of the oxygen consumption by mitochondria of 4T1 cells were corrected for ROX (Residual Oxygen consumption). There were no statistically significant differences between the tested samples.