The AMPK/NRF1 pathway was activated by 0.5 mM AICAR and GFP expression was monitored by flow cytometry and microscopy. Amount of mtDNA and mRNA of genes of interest was determined by quantitative PCR, and respiratory function was analysed with both Seahorse XF96 Analyzer and OOROBOROS Oxygraph-2k. Substrate preference for respiration was also investigated in the Seahorse XF96 Analyzer. Activation of AMPK by AICAR resulted in induction of NRF1 regulated transcription and increased levels of mtDNA, respiratory chain components and mitochondrial respiration. Gene expression analysis of an array of mitochondrial components demonstrated that multiple mitochondrial proteins were upregulated after AMPK/NRF1 activation. We found that NRF1 regulated GFP expression can be reversed by removal of AICAR (Fig 1). We also observed an increase in glucose/pyruvate driven respiration in AICAR treated cells but not in the presence of L-glutamine (Fig 2). 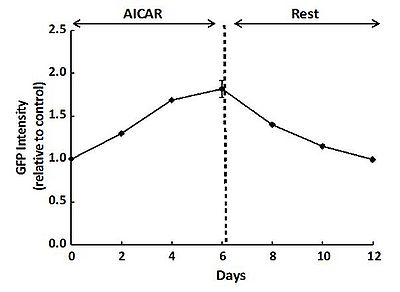 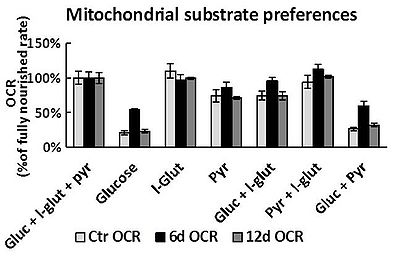