The endoplasmic reticulum (ER) is a specialized organelle for folding and trafficking proteins. It is highly sensitive to change in cellular homeostasis and extracellular stimuli, such as production of reactive oxygen species (ROS) and oxidative stress. Several chronic and degenerative diseases have been associated with ER and oxidative stresses [1]. The use of natural antioxidants derived from diet could be a strategic tool to alleviate both of them, at the same time enhancing the defense system [2,3,4].

Strawberry extract showed remarkable protective effects on oxidative and ER stresses at cellular and mitochondrial levels. A significant improvement in cell viability and apoptosis rate (Figure 1a) was found in cells treated with strawberry and stressed with AAPH or tunicamycin, as well as a relevant decrease in intracellular ROS (Figure 1b) and NO levels.

As shown in Figure 2a, basal OCR -an indicator of a damaged mitochondrial functionality- was markedly affected in cells treated with AAPH or tunicamycin, while cells pre-incubated with strawberry extract and stressed with AAPH or tunicamycin showed an OCR similar to that of control group, highlighting a considerable protection on mitochondria against oxidative and ER stress. At the same time, spare respiratory capacity (SRC) and maximal respiratory capacity (MRC) were affected in cells stressed with AAPH or tunicamycin compared to control cells (Figure 2b), while after pre-treatment with strawberries a significant improvement was found, demonstrating again the beneficial and protective effect of the extract on mitochondrial functionality. The maintenance of some respiratory capacity, even under conditions of maximal physiological or pathophysiological stimulus, is a major factor defining the vitality and/or survival of the cells. The ability of cells to respond to stress under conditions of increased energy demand is influenced by the bioenergetics capacity of mitochondria. This bioenergetic capacity is determined by several factors, including the ability of the cell to deliver substrate to the mitochondria, and the functional capacity of the enzymes involved in electron transport.

Figure 1. (a) Percentage of live, dead and apoptotic cells after each treatment and (b) Intracellular ROS generation in HepG2 after each treatment. Results are reported as mean ± SD of three experiments. Mean values belonging to the same set of data with different superscript letters are significantly different (P < 0.05). 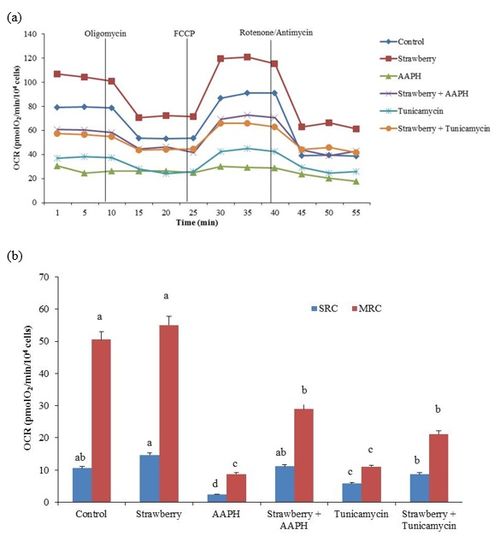