The impact of lipotoxicity on the genes regulating fatty acid oxidation in insulin resistant skeletal muscles was studied in our laboratory. Realtime-PCR based plate array has been used for this purpose, and we have identified many genes that are important for mitochondrial function and are significantly up- or down-regulated in rat skeletal muscle after high fat diet feeding. Importantly, several mitochondrial transporter proteins were included in this list of genes. 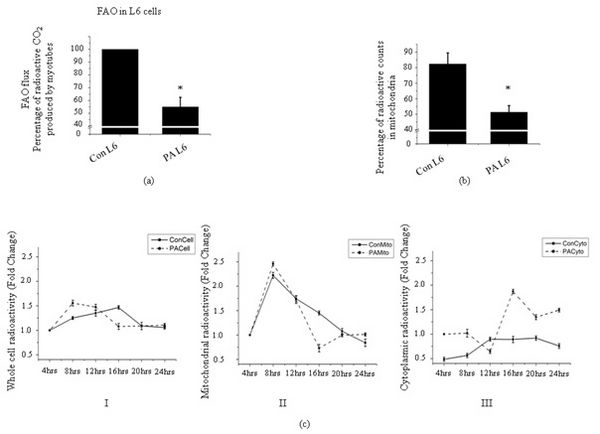 Figure 1. PA-mediated inhibition of FAO rate in muscle cells is shown in (a). Myotubes were incubated with or without PA in media containing trace amounts of radioalabelled [1-14C]-PA. Incubation of cells with 1 mM PA for 18 h reduced the FAO rate by about 40%. Excess PA restricts its own entry into mitochondria prior to FAO (b). Mitochondrial entry of radioactive metabolites in control and PA-treated muscle cells were measured after 18 h of incubation in presence of [1-14C]-PA. The cells were treated in presence or absence of 1 mM PA and radioactive count was measured from mitochondria and whole cell extract. (c) Time kinetics study of PA entry and its distribution in whole cells, mitochondria and cytosolic fractions. The cells incorporated more PA during 8 h of PA-treatment, but after that the, rate of PA uptake was reduced rapidly whereas control cell continues uptaking PA at a fairly constant rate (I). Mitochondrial fraction from control and PA-treated cells accumulate radioactive fatty acid derivatives almost at the same rate up to 12 h, then it decreases in PA-treated set, i.e. entry of PA in mitochondria is restricted after 12 h (II). The cytosolic fraction of PA-treated cells accumulate more radioactivity than that of control cytoplasm during 12-18 h of incubation. The statistical analysis was done as described in Materials and Methods. * represents (P<0.05).