Considerable progress in understanding the relationship between Ca2+ signalling cascades and mitochondrial physiology has been accumulated over the last few years due to the development of more advanced optical techniques and electrophysiological approaches. In summary, although major advances in understanding the molecular physiology of myometrium have been achieved, there is a pressing need to understand human uterine contractile activity and the role of other channels and receptors such as chloride, sodium, ryanodine and the role of nucleotides such as adenosine, adenosine diphosphate (ADP), and ATP in human myometrium. The role of CICR is still unclear in myometrium and needs further elucidation. There is also a need to fully understand the role of mitochondria in calcium homeostasis. These investigations and the development with the action of agonists and antagonists on uterine smooth muscle will add more to our understanding of uterine physiology and lead to more successful approaches in diagnosing and managing the reproductive disorders such as preterm labor, dysmenorrhea, prolonged labor, and weak uterine contractions (dystocia). It is apparent that understanding the normal physiology of uterine contractions and relaxation at the molecular and cellular level would help clinicians and healthcare providers to modulate unnecessary uterine activity if problems arise throughout Calcium Signaling pregnancy and to plan a suitable therapeutic target according to each problem.

This study was undertaken to elucidate the cellular coupling mechanism of beta3-adrenergic receptors with potassium channels in myometrium of non-pregnant buffaloes. In materials and methods the uteri of diestrous stage buffaloes were collected from local abattoir and myometrial strips were prepared from the mid-cornual region of uterus for measurement of isometric tension.

Result shows that Both BRL-37344 and SAR150640, two specific agonists of β3-adrenoceptors, produced dose-dependent inhibitory effect on myometrial spontaneity and this effect was blocked by SR 59230A, a selective β3 specific adrenoceptorantagonist. BRL-37344 was found to be more potent than SAR 150640 as the respective pD2 values were found to be 7.22 ± 0.09 (n = 7) and 3.27 ± 2.67 (n = 6). Further, potassium channel blockers, namely-glybenclamide (10 μM), tetraethyl ammonium (1 mM) and iberiotoxin (100 nM) significantly shifted the dose response curve of BRL-37344 towards right with reduction in efficacy (Rmax). However, 4-aminopyridine (1 mM) failed to alter the tocolytic effect of BRL-37344.

Our conclusion shows that results suggest by beta3-adrenergic receptors mediate an additional mechanism of myometrial relaxation in buffaloes and, besides direct involvement of β3-adrenoceptor, their tocolytic effect is also mediated through KATP and BKCa channels in buffalo myometrium. Therefore, beta3-adrenergic receptors seem to be a potential alternative target for management of pre-term labour; however, similar studies are warranted on uterus of pregnant animals. 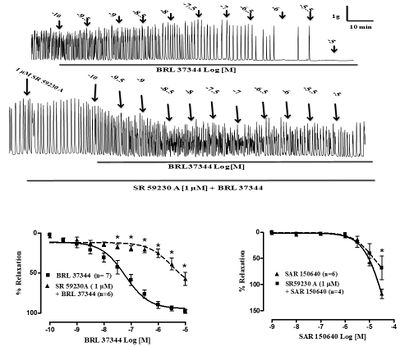 Figure 1. (a) Representative physiograph recordings showing the effect of BRL 37344, a β3-agonist, in the absence and presence of SR59230A, a specific β3-antagonist, on isolated myometrial strips of non-pregnant buffaloes. Comparative line diagrams showing the mean concentration response curves of BRL 37344 (b) or SAR 150640 (c) in the absence and presence of SR59230 A.Vertical bars represent SEM. *P <0.05 in comparison to BRL 37344 alone. 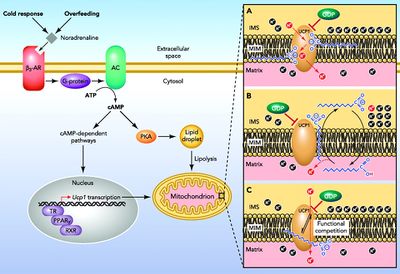