To assess the specificity of etomoxir on FAO in comparison to its inhibitory effect on mitochondrial respiration involving other mitochondrial pathways, we tested different concentrations of etomoxir (1-200 µM) on permeabilized Huh7 human hepatocellular carcinoma cells and isolated liver mitochondria from mouse, using high-resolution respirometry. Different sources of fatty acids (palmitoylcarnitine, palmityl-CoA + carnitine) were used to test the specific effect of etomoxir towards FAO (F-pathway). We have also investigated the off-target effect of etomoxir on mitochondrial respiration using NADH- (N) and succinate- (S) linked substrates alone and in combination with F-pathway (FN), or FAO in the presence of anaplerotic reactions [F(N)] in different electron transfer (ET) pathway states. Substrate-uncoupler-inhibitor titration protocol was used to study oxidative phosphorylation (OXPHOS) and ET capacities. The effect of etomoxir on complex I activity was also spectrophotometrically determined.

In conclusion, these results indicate an inhibitory effect of etomoxir downstream of the Q-junction, with an inhibition on complex I. This observation raises precaution in its application as specific inhibitor of FAO in respirometry and suggests that a profound characterization of etomoxir toxicity is required.

The mtFOIE GRAS project received funding from the European Union’s Horizon-2020 Research and Innovation program under the Marie Skłodowska-Curie Grant Agreement No.734719. Filomena Silva is recipient of a Post-Doctoral Fellowship from the Foundation for Science and Technology, SFRH/ BPD/122648/2016. Filomena Silva was participated in short-term scientific mission supported by MitoEAGLE (COST Action CA15203). 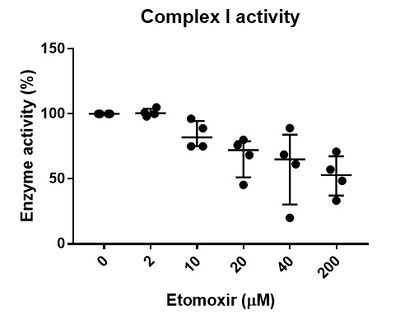