Propofol is a hypnotic agent routinely used for induction and maintenance of anaesthesia during surgery, as well as for sedation in intensive care units. Propofol infusion syndrome is a rare but potentially lethal complication of the drug. The mechanism of the syndrome is still unknown and specific treatment does not exist. Clinical features and previous in vitro studies performed on animal models are suggestive of its mitochondrial origin. In our study, we aimed to expose tissue homogenates of human skeletal muscle to increasing concentrations of propofol and observe its kinetic characteristics. We observed propofol effect on global mitochondrial parameters, individual complexes of respiratory chain and fatty acid oxidation.

The samples of human skeletal muscle (m. vastus lateralis) were obtained from metabolically healthy volunteers undergoing hip replacement surgery. Firstly, tissue homogenates were prepared according to the method previously described by our research group [1]. After that, we performed a series of experiments for assessment of energy metabolism using high-resolution respirometry (HRR; Oroboros O2k). We observed global mitochondrial functional indices (ATP production, leak, maximal respiratory capacity) and respiration linked to individual complexes: Complex I-linked respiration was measured after addition of malate plus glutamate; Complex-II linked respiration was assessed after addition of succinate; Complex IV-linked respiration after addition of ascorbate plus TMPD. The capacity of fatty acid oxidation was measured after addition of palmitoylcarnitine as substrate. For all of the experiments, we used increasing concentrations of propofol and assessed its kinetics as well. Data were analysed by multi-level analysis for repeated measurements (Software Stata 14.2). Propofol started to inhibit complex I-linked respiration at the concentration of 5 µg/ml. Complex II-linked respiration and fatty acid oxidation (FAO) was inhibited from concentration of 10 µg/ml. We observed no inhibition of complex IV-linked respiration. According to Lineweaver-Burk transformation for Michaelis-Menten we analysed that inhibition had a non-competitive character. Propofol caused leak of inner mitochondrial membrane only at the high supra-physiological concentrations. The maximal respiratory capacity (RCC) was decreased from the concentration of 75 µg/ml (see Table).

Previous animal studies demonstrated inhibitory effect of propofol on rat models, but inhibition was induced only by enormously high propofol concentrations. Our study proved propofol effect on mitochondria in an in vitro model of human skeletal muscle. We observed propofol-induced inhibition even at clinically relevant concentrations during anaesthesia or sedation (from 1 up to 10 µg/ml), which confirms previous results of our study performed on human myotubes. 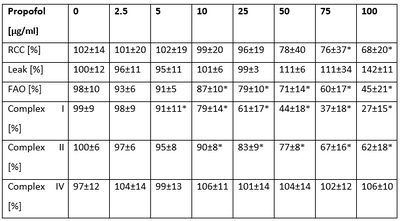 Table 1. Effect of propofol on bioenergetic parameters expressed as % of activity of control (average ± standard deviation). Statistically significant results are signed as * if p-value < 0.05.