In our study, 11 rats were used. Five of them served as controls and 6 animals were injected with DCA in 2 doses, 60 and 15 minutes before decapitation (total DCA dose 1.5 mmol/kg intraperitoneally) [2]. Rats were sacrificed, their hearts dissected and samples from left ventricles weighed (approximately 2 mg per chamber). Then the samples were homogenized by PBI-Shredder [3] (plastic lysis disc; 10/5 s) and mitochondrial respiration was evaluated by Oxygraph-2k (OROBOROS, Austria). A standardized SUIT protocol was used to characterize standard respiratory states (LEAK, OXPHOS and ROX); oxygen consumption was corrected for ROX and expressed per mg of tissue wet weight. Mitochondrial respiration was measured during normoxia (180 – 100 µM of O2) or after a period of anoxia (20 minutes; 0 µM of O2). 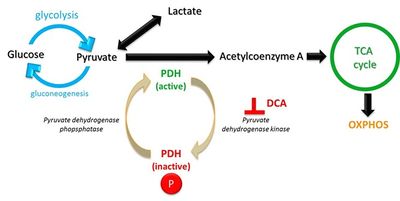