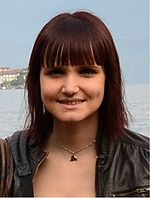 Previously, we showed that mitochondrialy targeted vitamin E analog MitoVES kills cancer cells by inducing apoptosis, especifically in transformed cells. The binding of MitoVES to the proximal ubiquinon binding (UbQp) site of Complex II (CII), accompanied by the inhibition of electron transfer within CII, and ensuing reactive oxygen species production were suggested as the molecular mechanism underlying apoptosis induction by MitoVES [1], but the direct experimental evidence for MitoVES interaction with the UbQp site was missing.

In the present study we focused on the interaction of MitoVES with this site in more detail. By site-directed mutagenesis, we prepared cells with UbQp site–directed point mutations in the SDHC subunit of CII. Next, we characterized their respiratory status, focusing on CII activity and assembly. Mutations S68L and R72C resulted in nonfunctional CII; although, in R72C, mutant CII was partially assembled. In cells with S68A and I56F mutations, CII-linked respiration was similar to wild type cells under coupled conditions; although, in case of S68A, mutant uncoupling with FCCP did not lead to significant increase in oxygen consumption. This suggests that this mutation compromised CII activity to some degree, but under physiological conditions this might be barely recognizable. In confirmation, mass spectrometry measurements did not reveal any increase in succinate levels for the S68A mutant, in contrast to S68L and R72C mutations, associated with nonfunctional CII. In cells with functional CII (wild type, I56F and S68A mutants), we determined the inhibitory effect of MitoVES on succinate-driven respiration and found IC50 values to be significantly higher for the mutants. To better characterize the mutated UbQp site we also carried out these experiments with two control inhibitors of CII: malonate, which binds to the succinate binding site in SDHA subunit, and TTFA, which binds to the UbQp site. Inhibitory curves and IC50 values for malonate showed very little, if any, differences between mutant and wild type CII, but the TTFA effect on CII-linked respiration in S68A mutant was almost one magnitude stronger than in cells with wild type SDHC. This suggests that the effect of mutations is local and UbQp site-specific.

Further, all the mutants were assessed for their susceptibility to various apoptosis inducing agents, including MitoVES, TTFA, hydrogen peroxide and staurosporine. MitoVES-induced apoptosis was reduced in cell lines with mutations in SDHC, particularly in those carrying S68A substitution. While there were some differences between the variant cell lines in apoptotic response to control compounds, they did not copy the MitoVES treatment response.

The findings, that for the I56F and S68A mutants the inhibition of CII-linked respiration and the pro-apoptotic activity of MitoVES were found reduced, suggest that the UbQp site of CII is the target of MitoVES, and that the observed diminished pro-apoptotic effect of the drug is not secondary due to the lack of electron flow through CII (as might be the case in cells with nonfunctional CII). Instead, it is directly linked to the reduced interaction of MitoVES with the UbQp site.