Abstract: At the annual Iditarod Race, Alaskan Huskies repeatedly run for up to 8 hours at 16 km/h to complete 1600 km. We previously demonstrated high rates of mitochondrial protein synthesis in Alaskan Huskies, which we suspected allowed rapid remodeling of mitochondrial proteins in response to energetic stress. The purpose of this study was to examine mitochondrial respiration in permeabilized skeletal muscle fibers of Alaskan Huskies in the offseason (Non-raced) and following the 1600 km Iditarod Sled Dog Race (Raced). We hypothesized that compared to Non-raced Huskies, raced Huskies that completed a 1600 km race would have greater mitochondrial respiratory capacities, and improvements in capacities of oxidative phosphorylation (OXPHOS) based on NADH-generating substrates as compared to fatty acids. Using high-resolution respirometry (HRR) we investigated the respiration of permeabilized muscle fibers from Alaskan Huskies. Maximum capacities were 254±26 pmol.s-1.mg-1 for OXPHOS (coupled, P) and 254±37 pmol.s-1.mg-1 for the electron transfer-pathway (ET-pathway; non-coupled, E). After racing respiratory capacities from NADH-linked substrates, but not fat-derived substrates increased. Finally, the OXPHOS to ET capacity ratio (P/E) increased after racing from 0.90±0.03 to 0.97±0.02. From our previous studies and the current study, we conclude that Alaskan Huskies maintain high mitochondrial protein turnover to facilitate rapid adaptation to environmental extremes and energetic challenges. 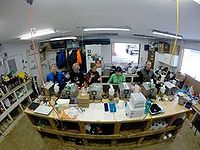 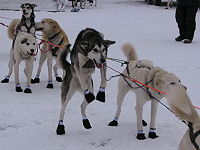 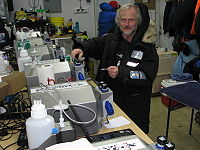 Retrieved from "https://wiki.oroboros.at/index.php?title=Miller_2017_PLOS_ONE&oldid=223135"
Category:
This page was last edited on 27 December 2021, at 11:52.
This page has been accessed 9,186 times.
Privacy policy
About Bioblast
Disclaimers