Mitochondrial markers are structural or functional properties that are specific for mitochondria. A structural mt-marker is the area of the inner mt-membrane or mt-volume determined stereologically, which has its limitations due to different states of swelling. If mt-area is determined by electron microscopy, the statistical challenge has to be met to convert area into a volume. When fluorescent dyes are used as mt-marker, distinction is necessary between mt-membrane potential dependent and independent dyes. mtDNA or cardiolipin content may be considered as a mt-marker. Mitochondrial marker enzymes may be determined as molecular (amount of protein) or functional properties (enzyme activities). Respiratory capacity in a defined respiratory state of a mt-preparation can be considered as a functional mt-marker, in which case respiration in other respiratory states is expressed as flux control ratios. » MiPNet article

Abstract: Respiratory performance capacity of an organism, tissue or cell may change due to a change in size, concentration of functional elements (biomarker density) or element function (mt-specific function). 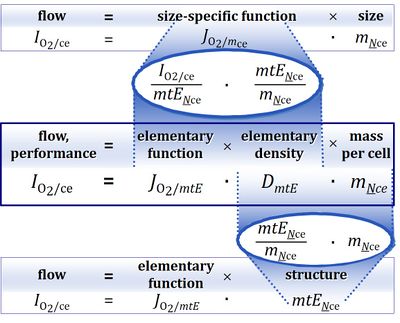 Markers for size are volume, mass, area. If mass is not expressed as total mass but as protein mass, then a physical marker of size is replaced by a biochemical marker. In isolated mitochondria, protein can be determined as a measure of amount of mitochondria or mt-concentration [mg mt-protein/mL]. However, protein cannot be used as a mt-biomarker in other mitochondrial preparations.

Determination of the size of a system under investigation always requires the definition of the system. The system (subject) whose phenotype is studied may be an organism, a tissue, or a cell. The biochemical marker total protein can be replaced by a specific protein, e.g. by a marker enzyme (Renner et al 2003). A biomarker can be considered as a functional element. Expressing performance (IO2, oxygen flow per biological system) per size yields specific performance (JO2, oxygen flux = flow per system size) in an unstructured analysis (Gnaiger 1993).

When replacing an enzyme activity by the respiratory activity in a defined respiratory state as a biomarker, then flow per mt-marker becomes a flux control ratio FCR (Gnaiger 2009; Pesta et al 2011). Expressing structure by functional markers is without problem as long as the structure in question does not undergo any functional (qualitative) changes.